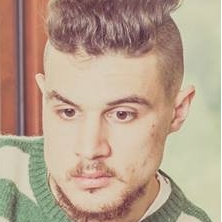 Alessandro Guerri started to study music at the age of nine, when he joined the drum course in the school of music in his born city,Jesi. He is still playing and studying drums. Since 2004, he has played with several projects in Italy and abroad (France,Spain,Portugal),created and produced official releases in Italy and United States. Ha played drums in the project “Bhava” releasing: -“Double Jump Carpiato” in Italy for Bloody Sound Fucktory, Escape from Today e in the United States forRadio is Down.(May 2009) In 2014/2015 releases two electronic music ep supported by Italian and international independent labels. In March 2015, he graduated in Electronic Music at Conservatorium “G.Rossini” of Pesaro with the thesis “Projectual Strategies for an Interactive Software-Structuring Relations between Algorithm and Musician”,presenting his project Agumenta.